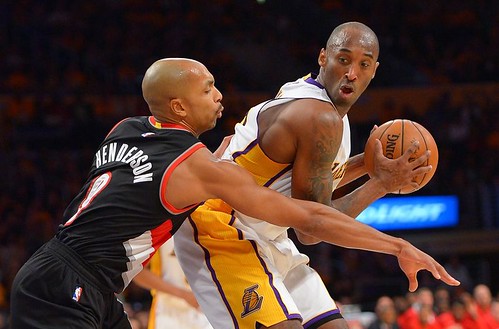 “There's something wrong with the rim.” That’s the first thing Kobe ever said to me.

People say Kobe’s a perfectionist. Yeah, maybe a little. Let me tell you about the first time I ever met him.

It was during pre-game shootaround, back in my rookie year in Charlotte in 2009, and the Lakers were visiting. Kobe was out on the court all by himself, putting up jumpers.

For a kid from Philly who grew up close to Lower Merion, this was a pretty big deal for me. Kobe was not only a national legend … he was a hometown legend. When I was 9 years old or so, my dad brought me to a high school game where Kobe dropped 50 – and he sat for the fourth quarter. I have visions of Kobe pulling up from one step inside half court — and draining it — and then walking back on defense with a strut, as if he knew just how good he was. He did. Lower Merion was a small gym. Standing room only. Everyone was there to see him.

That’s all to say that — yeah, by 2009, Kobe and I were both NBA players but he was just a bit better than me. Just a bit. Kobe had been my basketball idol more than half of my life. I tried to do everything he did. So seeing him in the flesh was a pretty cool moment for me.

So I’m shooting around and there’s still about 45 minutes until tip. Kobe’s on the other end, still shooting, and I’m glancing over at him. Remember, I’m a rookie. I want to see how this guy approaches warm-ups. Maybe I can learn something from him. Steal a move or two.

All of a sudden, I looked up and Kobe had stopped shooting. He was holding the ball on his hip with one hand — and motioning to the sideline with the other.

Then all sorts of commotion started.

A crew of maintenance guys showed up from out of nowhere. It looked like a hockey line change — maintenance guys rushing on and off the court. Kobe was saying something to them and gesturing. But from where I was standing, I couldn’t make out what they were saying.

Suddenly, there was a ladder being set up under the basket. Kobe’s pointing up at the rim and the maintenance guys are positioning the ladder. A measuring tape is involved.

What’s going on? Kobe was up to something.

I’m standing at half court watching the scene play out, and Kobe starts walking over to me.

“Something wrong with the rim.”

We’re watching a guy climb the ladder and tinker with the rim.

“Huh?” I mumble. I’d never really heard about maintenance issues with a rim before a game.

“I was missing shots that I don’t miss. I’m pretty sure it’s low. A quarter of an inch.”

Then it was over. That was it. Our first conversation. He went back to his shooting routine.

Two things pop into my head:

1. Man I can’t believe I just had a conversation with that cat…

Larry Brown was the Bobcats coach at the time. I have all the respect in the world for Larry, but he was tough on me, as he is on all rookies. When I was a rookie, it was a struggle to get any minutes. I’d pray to get 5, maybe 10 minutes a game, if that.

But the coaching staff knew I was one of our best defensive players. So before the game I told one of our assistant coaches Jeff Capel: “Cape, I want to play tonight man. I want to guard Kobe!”

Cape responded: “You gon’ get your chance.”

I’d like to say that the coaching staff listened. But more likely, the only reason I played that night was that Larry wanted to test me. He knew Kobe was my basketball idol and he wanted to see if I was up to the challenge.

After a couple guys picked up early fouls, Larry looked down the bench. I was way down at the end.

I jumped up off the bench. I was ready for my “chance.” I remember my hands were sweaty and my heart was beating too fast for someone who hadn’t been in the game yet.

I want to dispel a myth about the NBA. You might think, after playing the sport for our whole lives, from AAU to college to the NBA, that NBA players don’t get nervous. Forget that. NBA players get nervous, too.

I was a rookie checking into the game, cold, to guard Kobe Bryant.

I was nervous as ever.

Another secret: the way to get rid of nerves is to just launch yourself into the game. You just have to make a play, any play: get a stop on D, grab a rebound, dive for a ball. Anything to get into the flow of the game.

The first possession down, Kobe got it on the wing. I was on him. Here we go.

Now, I had watched Kobe growing up. I had watched lots of his game tape. I honestly felt like I knew his game as well as you can know a guy’s game from watching it. I thought I had a feel for him. I still do.

He knew I was a rookie, so he went right at me early. On the first play, he drove right, picked up his dribble, and shot faked at the elbow. I anticipated that move. It was classic Kobe. I stayed down.

He shot faked again — and, again, I stayed down. I wasn’t falling for that.

A few plays later, Kobe goes at me again. He drives me. He gets some space and I’m sure he’s going to let this one go … WRONG. He fakes and I go flying…

But instead of jumping into me to draw the foul, Kobe went into his bag of tricks.

As I’m in the air, Kobe reverse-pivots and steps under me, into the key, and throws the ball off the backboard. I’m still in the air, helpless. All I can do is watch.

You might be able to guess what happened next: he grabs his own lob off the backboard and rattles a dunk. The crowd went nuts.

I remember thinking to myself: Idiot, you can’t go for the fake.

This move was impressive for many reasons. Kobe had the skill to throw a prefect pass off the backboard to himself, gather the ball mid-air and thrust it through the hoop. But also, he did a move he probably did not need to do. He could have easily let me fall down on top of him and taken the two easy free throws. But he used his creativity to execute a move that most guys wouldn’t think about trying. Why? For the fans? For the highlight reel? For his legend? Who knows. The guy is special.

Kobe finished the game with 30 points. After the game, Coach Brown gave me a nod and said I’d played well. I think he meant it. Even though Kobe got 30, I had stuck to my game plan. For great scoring guards, the game plan is pretty universal: limit your guy to tough, contested two-point shots. If they’re off-balance jumpers, even better.

Problem is, an off-balance, contested jumper might be Kobe’s strongest offensive move. You know the one where he drives past his defender, finds his spot, stops on a dime in front of the help defender, elevates, releases the ball at the height of his jump over an outstretched hand, leans back to put a little more arc on it. If you’re a defender, that’s a great shot to have your opponent take. Any coach would smile at that.

But Kobe makes those shots — consistently. And there’s nothing you can do about it…

Kobe’s perfected the art of scoring, if that can be done. He has counters to your counters. He has a toolbox full of scoring moves. Every night, he has new tools in there, for new scenarios. Good defense rarely slows Kobe down. In a crazy way, good defense makes Kobe better. It just reveals new moves that he’s been waiting to try out.

At his best, Kobe didn’t just have a jump shot, he had a well-rounded game. He was a perennial NBA All-Defense team member. Kobe would check the other team’s best perimeter player every night and lock him down. His whole career, he was an underrated passer because of the difficult shots he would take and make. He was as versatile as they came.

This season, his final of 20, Kobe has not been his regular self. Injuries have clearly caught up to him and he has not performed like he has in the past. Many have thrown shade on him, almost as if they’ve forgotten what the guy has meant to the game. Forgotten what he’s done for the NBA. Forgotten what he’s done for young kids like me growing up who looked up to him. I don’t have to break down the reasons why Kobe is one of the greatest to ever play basketball. Commentators will be doing that all year long on Kobe’s farewell tour – and for years to come.

In the sport of basketball, and any sport for that matter, you play the game to win. So with everything that is Kobe Bryant, the most admired and respected part about him is that he is a CHAMPION. Five times over. No one will ever forget that.

After the buzzer sounded, I was walking off the court and I saw one of the maintenance guys — one of the guys who was carrying the ladder onto the court during warm-ups.

“Hey man, what was up with the rim before the game?”

“Oh, someone notified us that it was a little lower than regulation.”

Then he told me how much it was off by.

I could tell you his answer, but I think you already know what he said.